Internet and SMS communications have helped in the creation of a specific type of informal written communication.

Internet and SMS communications have helped in the creation of a specific type of informal written communication we all know about. The SMS or chat message has to be conveyed in a fast and direct manner and with as few characters as possible. In addition to text, we also add images, symbols, and numbers and therefore we could say that SMS and Internet communication looks like a collection of encoded messages. These codes are, however, widely known. Or are they?

While searching for Internet and SMS codes and acronyms, we were stunned by the amount of those we didn’t know. Many of us would laugh and say that these acronyms are all well known, but they would probably also be stunned by the sheer amount of acronyms they have never heard about. For those who would like to test their knowledge, we have created a list divided in three sections, from the more to less common ones. The definitions can be found at the end of the article.

We could say that SMS and Internet communication looks like a collection of encoded messages. 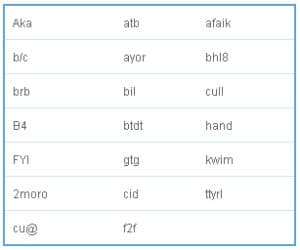 In case you couldn’t guess the meanings of the acronyms above, do not worry, they are created at such an amazing speed that it’s impossible to track their development. The most striking thing about the acronyms is that more of them are created every day and that anyone can create them. Good luck with creating the new acronyms and encoding the existing ones!

aka = also known as

brb = be right back

FYI = for your information

cu@ = see you around

atb = all the best

ayor = at your own risk

btdt = been there done that

afaik = as far as I know

hand = have a nice day

kwim = know what I mean

ttyl = talk to you later

A translation style guide – what is it and why do you need one?

Are you planning an international marketing strategy to expand your customer base? Then you’ll need to explain your distinct brand identity to reach new areas.

Is the tone of your brand professional and serious or informal and filled with slang and other colloquialisms? Make sure your translator knows this!