The 4th National Conference on Corporate Social Responsibility was held yesterday, 25 April 2013, at the Regent Esplanade Hotel in Zagreb under the patronage of the president of the Republic of Croatia, Ivo Josipović. Ciklopea has for the second time received the CSR Award, this time for 2012, in the category of small business for achievements in corporate social responsibility. This award has confirmed Ciklopea’s status as a successful business that supports CSR and the Global Reporting Initiative (GRI). The CSR Award is presented by the Croatian Business Council for Sustainable Development (CBCSD) and the Croatian Chamber of Economy (CCE). Executive director Sandra Boljkovac Stojak accepted the CSR Award on behalf of Ciklopea. It is worth mentioning that this year the European CSR Award was presented for the first time. The winners presented their projects and will attend a ceremony in Bruxelles on 25 June 2013.

At the very beginning of the Conference the participants were greeted by Ivo Josipović, president of the Republic of Croatia, Hrvoje Dokoza, representative of minister Mihael Zmajlović, and Violeta Simeonova Stančić, head of the European Parliament Information Office in Croatia.

CSR practices of Norway, Serbia and Slovenia were also presented, while a UNICEF representative gave a review of the relationship between children’s rights and the business sector. Croatian Employers’ Association presented the project CSR For All.

Head of the CBCSD, Mirjana Matešić, concluded the Conference by saying that a more intensive dialogue between the public, civil and business sector is needed to strengthen CSR in practice. 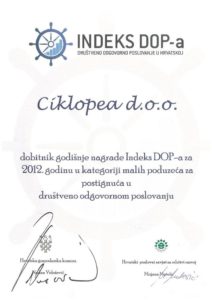