WordCamp Zagreb 2017, the largest WordPress-focused conference in Croatia was held on 1-3 September 2017.

Ciklopea employees from BDM, Sales, Production and Human Resources departments teamed up with our long-time partners and WordCamp organizers Emanuel and Lucijan Blagonic of Blagonić Brothers to expand our knowledge and learn more about the latest developments in the world of WordPress.

The event was split into workshops which were held on the first day, while the conference was held on the second day of WordCamp Zagreb.

The second day conference was held at the Museum of Contemporary Art in Zagreb, where the topics dedicated to freelancers and developers (development, application and monetization of WordPress plugins) were covered through separate tracks.

The Ciklopea team attended the WordCamp workshops to get the latest information on the subjects of public speaking and multilingual WordPress localization, as well as the CMS platform itself and the exciting new features for WordPress such as the new Gutenberg WordPress editor.

Being a tech-savvy and an industry-focused LSP, we were happy to get fresh insight into the technologies that we are already using and into the possible further optimization of the solutions and processes that we offer to our clients, such as the multilingual L10n of WordPress-powered websites with WPML. The workshop on this topic was led by Dario Jazbec Hrvatin of OnTheGoSystem.

In our view, WordCamp Zagreb 2017 was a success on several levels and we are looking forward to further events of this kind in Croatia. 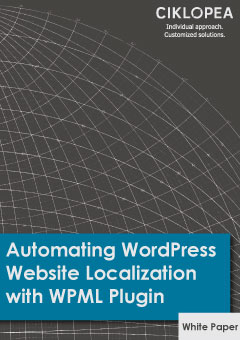 We are rounding up 2020 on a high: our employer branding efforts have been recognized by independent experts and awarded with Croatia’s Best Employer Brand Award 2020 in the Small Business Category.

Leading Croatian HR consultancy SELECTIO has awarded selected Croatian and international companies that demonstrated high quality human resources management and care for their employees during the pandemic. We are happy to announce that Ciklopea is one of these companies.

We are proud to announce that independent market research firm CSA Research recognizes Ciklopea as a leader in the multi-billion global translation, interpreting, and localization industry.