Ciklopea was awarded the Corporate Social Responsibility award (Indeks DOP-a) at the 15th anniversary of the Croatian Business Council for Sustainable Development. The company was given the CSR award for its first Corporate Sustainability Report, which ranks it among many other successful businesses that endorse CSR and the Global Reporting Initiative. The CSR award is given by the Croatian Business Council for Sustainable Development and the Croatian Chamber of Economy. The awards ceremony and the celebration of the anniversary were held in the Old Town Hall of the City of Zagreb.

During the ceremony the minister of business and trade Gordan Maras congratulated everyone who won the award. He also addressed the importance of corporate social responsibility and investing in employees. “I am especially glad to see many public companies, because I believe they are the ones that must invest greater efforts into achieving corporate social responsibility”, Maras said and added that “CSR is not and should not be the privilege of large companies.”

Other speakers at the event were Deputy President of the Croatian Parliament Milorad Batinić, envoy of the President of the Republic of Croatia, Boris Cota and others who have been directly involved in CBCSD over the past 15 years.

Ciklopea’s CSO Mladen Stojak was handed the award for achievements in corporate social responsibility in the category of small enterprises. Speaking about the success of his company Stojak said that, considering the state of economy in the country, sustainable development can seem like an unattainable goal. However, CSR has been the key advantage and driving force for Ciklopea since its establishment in 2003 until today. “Ciklopea grows and develops thanks to exchange of knowledge, investments into technology, use of local resources and other responsible practices. Positive changes in our clients’, vendors’ and employees’ lives, as well as our community are our greatest motivation and reward,” says Stojak. 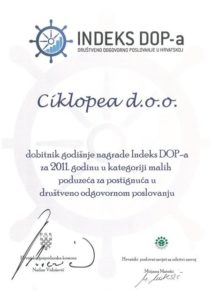