Here’s the basic scenario: you have the translated versions of your documents, but the translation wasn’t performed in a CAT tool and you have to build a translation memory because these documents need to be updated or changed across the languages, you want to retain the existing elements, style and terminology, and you have integrated CAT technology in your processes in the meantime. The solution is a neat piece of language engineering called translation alignment.

Translation alignment is a native feature of most productivity tools for computer-assisted translation, but its application in real life is limited to very specific situations, so even the language professionals rarely have an opportunity to use it. However, these situations do happen once in while and when they do, alignment usually comes as a trusty solution for process optimization. We will take a look at two actual cases to show you what exactly it does.

Example No. 1: A simple case

Since the translated documents were properly formatted and there were no layout issues, the alignment process was completed almost instantly. The software was able to segmentize the source files and we matched the translated segments, with some minor tweaking of segmentation. We then built a translation memory from those matched segments and added the new files to the project.

Thanks to the created translation assets, the final wordcount of the new content was around 1500 and our linguists were able to produce translation in accordance with the previously established style and terminology. The assets were preserved for use on future projects. 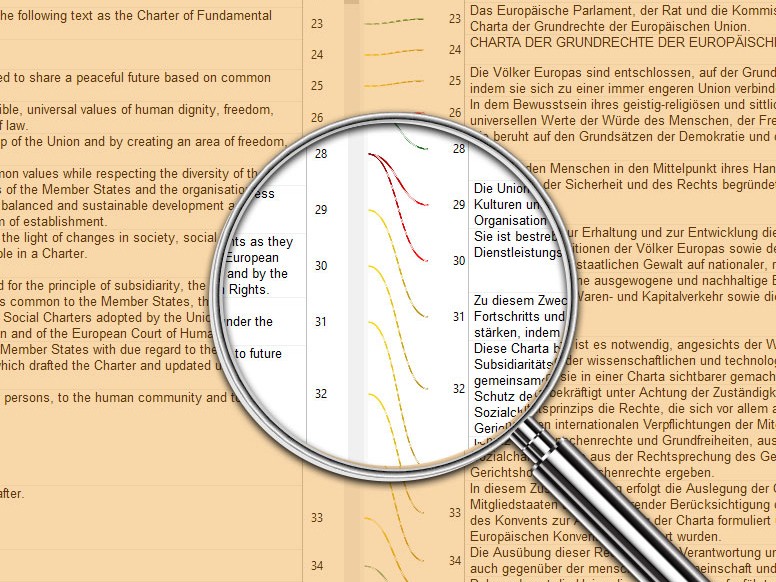 Example No.2: An extreme case of multilingual alignment

In one of our projects we had to develop translation assets in four language pairs, totaling roughly 30k words per language. The source materials were expanded with new content totaling about 20k words unweighted and the language assets had to be developed both to retain the existing style and terminology solution and to help the client switch to a new CAT platform.

Unfortunately, there was no workaround for ploughing through dozens of files, but once we organized the materials we could proceed to the alignment phase. Since these files were localized and some parts were even transcreated to match the target cultures, which also included changes in layout and differences in content, we knew that alignment was not going to be fully automated.

This is why native linguists in these languages performed the translation alignment and communicated with the client and the content producer during this phase. While this slowed the process a bit, it ultimately yielded the best results possible.

We then exported the created translation memory in the cross-platform TMX format that allowed use in different CAT tools and the alignment phase was finished.

With the TM applied, the weighted volume of new content was around 7k words. Our linguists localized the new materials in accordance with the existing conventions in the new CAT platform and the translation assets were saved for future use.

In both cases, translation alignment enabled us to reduce the volume of the new content for translation and localization and ensure stylistic and lexical consistency with the previously translated materials. It also provided an additional, real-time quality control and helped our linguists produce a better translation in less time.

Translation alignment is not an everyday operation, but it is good to know that when it is called to deliver the goods, this is exactly what it does.

Localization for the Automotive Industry: Keeping it Consistent

Cars. They are complex, sophisticated and ubiquitous. Their build quality and safety features are extremely important in our everyday lives. Yet, much of what we need to know when purchasing a car is contained in its brand – luxurious, family, sport cars, SUVs (and more) are all safely tucked in the brand names whose reputation has been carefully developed for decades. And it is probably true that for most of these decades, the localization requirements of the automotive industry were mostly limited to marketing materials and user manuals. But all things change.

The slightly ominous phrase digital disruption has been a buzzword over the past several years. In this article we will try to explain what does it actually mean, what is the role of translation solutions in the process and how does it affect the language industry. What is disrupted? Digital disruption is another name for […]