The complex and diverse landscape of the South Slavic linguistic area may often seem bewildering from the outside. How many languages are spoken in the Balkans? Is it Serbo-Croatian? Do I have to localize my product to Bosnian or to Croatian? – These are some of the questions every LSP is likely to hear from new clients entering into the markets of Croatia, Bosnia, Montenegro or Serbia, while the scientific and technical acronyms and names for these languages such as BCS, BCSM, Serbo-Croatian or Central South Slavic diasystem are of little help in clarifying this confusion.

There is an ongoing and seemingly unresolvable linguistic debate on where precisely a dialect of one language ends and a different language begins. The truth is that there is simply no objective way of providing an answer to this question and this is one of the reasons why the total number of world languages remains estimated rather than determined.

What can be objectively determined, though, are the realities of a specific linguistic area and this article is about them.

Croatian, Bosnian, Serbian and Montenegrin are the four standardized languages, meaning they are developing independently, and their linguistic norms, orthography and grammar are independent and regulated by their own respective institutions. Each of these languages has its own regional dialects and non-standard forms with variable degrees of mutual intelligibility.

The differences between these languages are lexical, morphological and syntactical, the degree of which is lower than that between British and American English in certain aspects (lexical stock) and in some cases higher (syntax, morphology, orthography).

Native speakers from all countries of the region fully understand each other and cultural products such as movies, books, music albums and TV programs are regularly shared between Serbia, Croatia, Bosnia and Montenegro, mostly without any linguistic adaptation.

Due to the distinctive features of each language, however, every native speaker of either Serbian, Croatian, Bosnian or Montenegrin can always determine from which country a product or a person comes.

A linguistic product featuring elements from more than one of the four distinct standardized languages is quite simply a poor linguistic product. Translation assets such as translation memories or termbases developed on the basis of mutual intelligibility between Serbian, Croatian, Bosnian and Montenegrin alone are often unusable before a thorough editing, ultimately demanding more resources instead of less.

The linguists native in one of the four languages understand the materials composed in other languages, but it doesn’t necessarily mean they can produce impeccable linguistic products in their non-native language forms, unless they are fully aware of the entire scope of more and less subtle differences between these languages.

For these reasons, it is important to remember that mutual intelligibility is not necessarily your friend. Croatian or Bosnian translation assets and/or linguists will not help you get a high quality linguistic product in Serbian and vice versa. The most they can do is provide consulting materials in certain cases.

Regardless of their linguistic and cultural similarities, these are four different markets with four different languages and while any content localized to, for example, Croatian will certainly be understood in Serbia, Bosnia and Montenegro as well, it will most definitely be recognized as the content developed for the Croatian market.

Localization is always about the market and the standard language – as there is no single standardized form of the mutually intelligible languages spoken in these four countries and since they do not form a single market, the localization efforts for this part of the world should be accessed the same way as for any other.

Last but not least, legal requirements in each of these countries demand that marketing materials, user manuals, SPCs, PILs and all other materials designated for public use be presented in the official language of the country – and there are four of them. 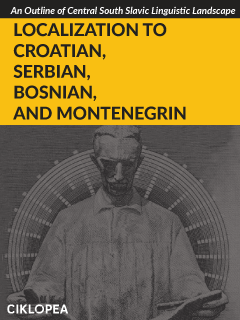 Download our free eBook on Localization to Croatian, Serbian, Bosnian, and Montenegrin

The Pivot Language Approach and Multilingual Localization Projects: How and When it Works

According to the Cambridge English Dictionary, pivot is “a fixed point supporting something which turns or balances, or a person or thing on which something else depends”. If we imagine for a moment the localization process as a mechanism, the source material will have the function of the pivot, because in every possible scenario, from AI-powered machine translation with post-editing to the good old translation and proofreading, the quality of the source material is the factor that will always dictate both the process efficiency and the ultimate quality of the localized materials, regardless of all the technical magic and linguistic knowledge involved.

All you need to know when buying Translation and Localization Services

The localization landscape is extremely fragmented, and you probably noticed that it may be a bit confusing to define what types of services you really need, as well as how to deal with the non- familiar industry terminology.